You are here: Home / Events / Feminism + the Senses: Nayan Shah

Why, when and how does the refusal to eat while in detention become a viscerally potent and politically volatile protest that challenges the legitimacy and conditions of incarceration? 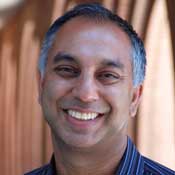 A professor of American Studies and Ethnicity and History at USC, Nayan Shah is a researcher who challenges conventions of social history by exploring the intersections of medicine, immigration, racism, capitalism and intimacy in relation to the U.S. and Canadian states. “His previous work on contagion scares vis-à-vis East Asians immigrants and homosocial networks among S. Asian laborers in the late nineteenth and early twentieth centuries has shaped the fields of American history and gender and sexuality studies,” says Rachel Lee, Director of the UCLA Center for the Study of Women. Shah’s new work on mass hunger strikes of political prisoners in South Africa, Israel, and Guantanamo, and refugees in the U.S., Australia and Europe led Lee to invite Shah to give the inaugural lecture in the Center’s 2015-2016 speaker series on “Feminism and the Senses: Sense Data and Sensitivity in an Age of Precarity.” On October 28, Shah will give a talk on “Refusing to Eat: Sensations, Solidarities and the Crises of Detainee Hunger Strikes.” 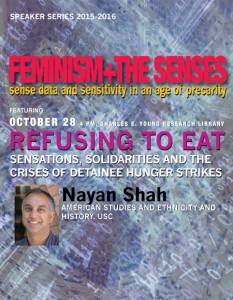 The Feminism + the Senses lecture series addresses how social movements around gender, sexuality, and race have a crucial relationship to sense data, sentimentality, and sensitivity. It opens up for collective exploration the question of which sensory registers have been favored by our scholarly disciplines where they intersect with feminist and queer activism. At the same time, this series aims to catalyze reflection on the “sensitizing concepts” that have historically been of value to feminist and queer scholarship and those prospective concepts arising in other social justice movements that have yet to become sensitizing to feminism.

Drawing on feminist theories of bodily subjectivity, affect and ethics, Shah will explore how sensory data, sensation, and sensitivity to human suffering mobilizes social justice movements, bioethical controversies, and challenges to state power. His current research examines prison hunger strikes and transformations in medical ethics and human rights movements across the past thirty years by exploring struggles in apartheid South Africa, refugee asylum and political prisoner protests in Europe, Middle East and Australia, and most recently in the California Prisons and in Guantanamo. 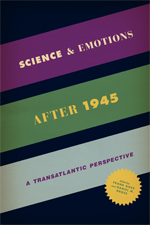 In a recent essay—”Feeling for the Protest Faster: How the Self-Starving Body Influences Social Movements and Global Medical Ethics,” a chapter in Science and Emotions after 1945, edited by Frank Biess and Daniel M. Gross (Chicago: University of Chicago Press, 2014)—Shah opens his exploration of the self-starving body’s role in social movements and medical ethics with a quote from George Annas’ article on “Hunger strikes” in the British Medical Journal in 1995 (311:1114):  “The power of the hunger strike comes from the striker’s sworn intent to die a slow death in public view unless those in power address the injustice or condition being protested.” In his analysis, Shah shows that there are three dimensions of emotional responses and actions: the mobilization of feelings of sympathy as well as anxiety, outrage, and sadness within the followers of a social movement; the self-management, mental discipline, and emotional regulation of the hunger striker who practices resolve and fearlessness; and the conflicting emotions experienced by physicians caring for patients who are hostile to treatment and interacting with state-controlled regimes that undermine the autonomous authority of medical professionals as well as quality of care and patient trust.

Examining the hunger strikes of Gandhi and Cesar Chavez and their mobilization of social movements, Shah provides a brief yet in-depth analysis of how each man’s fasting was culturally and socially situated in their respective communities and fostered a distinct emotional response from their followers: “Gandhi and Chavez explained their emotional state in undergoing their fasts as a fearlessness that necessitates the cultivation of spiritual conviction to fortify one’s mental resolve when actions that are detrimental to one’s own body can be understood to be for the collective good” (“Feeling for the Protest Faster,” 248). In juxtaposition to these two singular examples, Shah also details a clinical study of 33 South African political prisoners engaged in a hunger strike, which provided a scientific breakdown of the body’s decomposition and resulting symptoms due to starvation. These results were used in the medical community to encourage physicians to provide better medical advice to patients and other doctors. The resulting global medical ethics established have eclipsed the realities of other communities surrounding the striker and created another sort of fearlessness and independence to protect the medical professional from intense external pressures.In Shah’s words, “Fearlessness is an approach that catalyzes intense emotions of anger, distress, and despair and transmutes them into a capacity to endure for the sake of justice physical pain, deprivation, and suffering without capitulating and abandoning deeply held principles” (“Feeling for the Protest Faster,” 244). 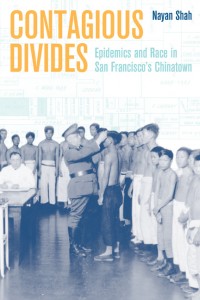 Shah’s new research once again challenges conventions of social history by exploring the intersections of capitalism, intimacy, immigration, racism, citizenship, and the state—as in his first two books: Stranger Intimacy: Contesting Race, Sexuality and the Law in the North American West (UC Press, 2012) and Contagious Divides: Epidemics and Race in San Francisco’s Chinatown (UC Press, 2001). Contagious Divides examines the problem of citizenship and the governance of modern society through an analysis of public health and Chinese immigration in San Francisco from 1854 to 1952. By vividly detailing how representations of Chinese immigrants shifted from medical threat to model citizen over this time period, this book documents the history of racial formation in the U.S. It traces how the public health rhetoric of the contagion of Chinatown bachelor society provided white politicians, white middle-class female social reformers, and white male labor leaders the necessary foil against which they were able to elaborate a vision of the norms of nuclear family domestic life and a sanitary social order. Thomas Bender, Director of the International Center for Advanced Studies at NYU, and editor of Rethinking American History in a Global Age, lauded Contagious Divides: “Shah has written a book of exceptional originality and importance. With a focus on issues of body, family, and home, central concerns of urban health reform, he illuminates the role of political leaders, public opinion, and professionals in the construction and reconstruction of race and the making of citizens in San Francisco. He brilliantly analyzes the politics of the movement from exclusion to inclusion, regulation to entitlement, showing it to be an interactive process. Yet, as he shows with great subtlety, the mark of race remains. As a study of citizenship and difference, this work speaks to a central theme of American history. 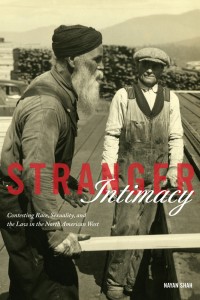 In Stranger Intimacy, Shah follows the experiences of South Asian migrants and their social and intimate relations in the United States and Canada from 1900 to the 1940s. According to Inderpal Grewal, author of Transnational America: Feminisms, Diasporas, Neoliberalisms, “Stranger Intimacy shows us how a diverse set of laws produced immigrant subjects through race, heteronormativity, and the white, nuclear family. ‘Stranger intimacy,’ in Shah’s brilliant concept, is the site of regulation, struggle, and possibility.” “B
ased on virtuoso research interlaced with a lucid and compelling analysis, ” writes Lisa Duggan, author of The Twilight of Equality: Neoliberalism, Cultural Politics and the Attack on Democracy, “Stranger Intimacy challenges the assumptions at the heart of most social history. Refusing to separate political economy, state practices, racialization, and the regulation of domesticity and sexuality, Shah reads legal and bureaucratic archives for stories of non-normative sociality among multi-racial transient migrants in the early twentieth century.”

Shah’s work illuminates heterogeneous social relations by repudiating the tired constructs that separate the study of political economy, state practices, racialization, and the regulation of sociability.

Part of CSW’s Gender Research and Equity Committee initiative, with support from the Office of Interdisciplinary & Cross Campus Affairs, Feminism + the Senses features:

Daphne Brooks (Yale U), ” If You Should Lose Me’: The Archive, The Critic, the Record-Shop, and the Blues Woman,” March 10,2016, 3:30 pm, YRL— cosponsored by UCLA Department of Musicology and the Charles E Young Research Library

Natasha Meyers (York U), “Ungrid-able Ecologies:Cultivating the Arts of Attention in a 10,000-Year-Old Happening,” May 17,2016, 4 pm — Supported by the Estrin Family Lecture Series Fund and the Institute for Society and Genetics

Lena Astin, cofounder of CSW and influential feminist scholar, has passed a...