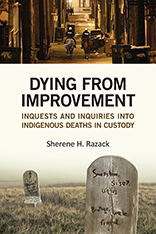 Dying from Improvement: Inquests and Inquiries into Indigenous Deaths in Custody

In her new book Dying from Improvement: Inquests and Inquiries into Indigenous Deaths in Custody, Sherene H. Razack argues that, amidst systematic state violence against Indigenous people, inquiries and inquests serve to obscure the violence of ongoing settler colonialism under the guise of benevolent concern. They tell settler society that it is caring, compassionate, and engaged in improving the lives of Indigenous people – even as the incarceration rate of Indigenous men and women increases and the number of those who die in custody rises.

A professor in the Department of Social Justice at the Ontario Institute for Studies in Education, University of Toronto, Razack is a noted postcolonial feminist scholar whose other books include Canadian Feminism and the Law: The Women’s Legal Education and Action Funs and the Pursuit of Equality (1991), Looking White People in The Eye: Gender, Race, and Culture in Courtrooms and Classrooms (1998), Dark Threats and White Knights: The Somalia Affair, Peacekeeping, and the New Imperialism (2004), and Casting Out: The Eviction of Muslims from Western Law and Politics (2008). According to Verna St Denis, Department of Educational Foundations, University of Saskatchewan, “Dying from Improvement makes a compelling argument that colonialism is not a thing of the past, but is real and ever present. Razack’s analysis illustrates the normalization of the dehumanization of Indigenous people, while offering a meticulous, thoughtful, and sensitive defense of the humanity of those affected.” Inher review, Audra Simpson, Department of Anthropology, Columbia University, called the book “…sociology at its finest, theorized and argued in a robust, relentlessly accessible, and yet sophisticated way. Dying from Improvement is a major contribution to the issues of Indigenous disposability, suffering, and struggles for justice within a settler state that is dedicated to their disappearance.”

Razack’s other books include Canadian Feminism and the Law: The Women’s Legal Education and Action Funs and the Pursuit of Equality (1991), Looking White People in The Eye: Gender, Race, and Culture in Courtrooms and Classrooms (1998), Dark Threats and White Knights: The Somalia Affair, Peacekeeping, and the New Imperialism (2004), and Casting Out: The Eviction of Muslims from Western Law and Politics (2008).

In a talk about her new book on December 3 (4 to 6 pm in room 1314 of the UCLA School of Law), Razack will address these issues:

What do inquests and inquiries reveal about how and why Indigenous people die in custody? What is said about a sixty-seven-year -old man who dies in a hospital in police custody with a large, visible, purple boot print on his chest, a mark no one in the hospital or among the police notice? How do we account for the police dropping off a barely conscious, alcoholic older man, Frank Paul (Mi’kmaq), in a dark alley on a cold Vancouver night, a man who could be seen on a video recording being dragged into the police station, presumably unable to walk on his own? What sense are we to make of the patterns of these deaths – patterns involving a repeated failure to care, a systemic indifference and callousness, and sometimes, outright murder? I advance the argument that the violence state actors visit on Indigenous bodies imprints colonial power on the skin, as much as the branding of slaves or the whipping and abuse of children in residential schools once did. Such a branding declares Indigenous bodies, and crucially their lands, to be settler property, and simultaneously announces that Indigenous people are subhuman, the kind of human one can only deal with through force. Importantly, the power imprinted on bodies need not take the form of a boot print. The failure to provide care, indeed to care, marks the body as a lower form of humanity, one that is already in between life and death. Legal processes such as inquests and inquiries endorse the racial hierarchy that a boot print produces through routinely declaring such actions as lawful, necessary, or inevitable. Through a legal performance of Indigenous people as a dying race who are simply pathologically unable to cope with the demands of modern life, the settler subject is formed and his or her entitlement to the land secured. The settler and the settler state are both constituted as modern and as exemplary in their efforts to assist Indigenous people’s entry into modernity. In this way, a killing becomes saving, and murder brings redemption.

Razack’s talk has been organized by the Critical Race Studies Program of UCLA School of Law and is cosponsored by the UCLA Department of Gender Studies, the UCLA American Indian Studies Center, and the UCLA Center for the Study of Women’s Research and Equity Committee initiative (supported by the Office of Interdisciplinary and Cross Campus Affairs).