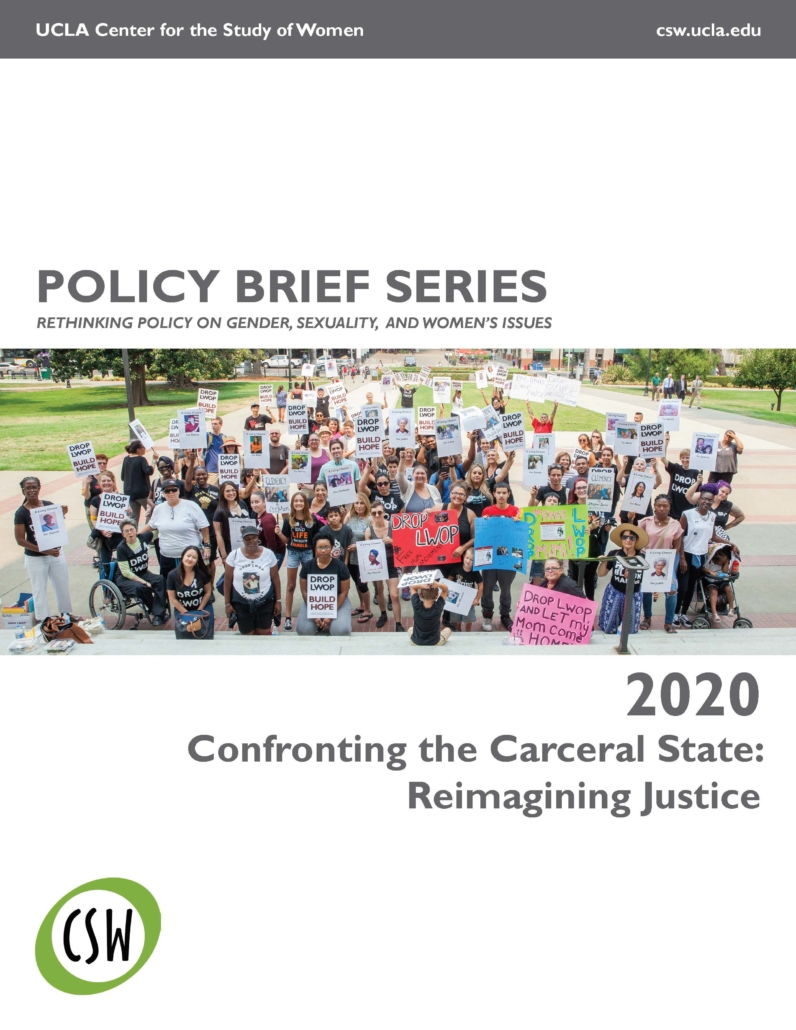 In 2019-2020, six briefs were honored with the CSW Policy Brief Prize. The prize recipients included graduate students from UCLA and UCSD, as well as system-impacted activists and organizers from the California Coalition for Women Prisoners (CCWP) and the Drop LWOP coalition.

Policing, surveillance, and incarceration are major issues for social justice feminism. As part of our Feminist Anti-Carceral Studies research stream, CSW invited submissions of Policy Briefs that challenge punitive approaches to justice that dominate in the United States.

The United States has the highest rate of women’s incarceration in the world. Only 4% of the world’s female population lives in the U.S., but the U.S. accounts for over 30% of the world’s incarcerated women.1 Discourses about gender expand the overall prison system. Legislators and prison authorities increasingly use “gender responsiveness,” the notion that prisons can be designed to respond to the needs of women and children, to expand prison budgets and justify prison building.

Women, especially women (and girls) of color, are routinely criminalized for survival. In 1975, Dessie Woods was prosecuted for defending herself against rape by a white man in rural Georgia. Today, we see the legacy of criminalizing survival and survivors in the cases of Marissa Alexander, Bresha Meadows, and many others. Nearly 60% of people in women’s prison nation-wide, and as many as 94% of some women’s prison populations, have a history of physical or sexual abuse before being incarcerated.

LGBTQ communities are disproportionately impacted by prison expansion: nearly 60% of incarcerated girls identify as LGBTQ, while nearly one in six transgender Americans, and 47% of black transgender people, have been incarcerated.2 Prisons entrench gender conformity by institutionalizing gender segregation and depriving trans-prisoners of necessary health resources.

Incarceration and policing are modes of gender violence that undermine reproductive and economic justice, endangering women and children through estrangement, physical and psychic abuse, and by creating economic precarity. Given this reality, we invite policy briefs that boldly re-imagine justice in the U.S., placing the needs of LGBTQ communities, communities of color, and survivors of violence at the fore. Abolitionist approaches to carceral policy are especially encouraged. What policy interventions can help reverse prison expansion, dismantle the infrastructure that enables the policing of vulnerable communities, and help achieve justice?