Ula Taylor, “The Promise of Patriarchy: Women and the Nation of Islam”

Organized by the UC Consortium for Black Studies in California

Ula Y. Taylor discusses her recently published book, The Promise of Patriarchy: Women and the Nation of Islam 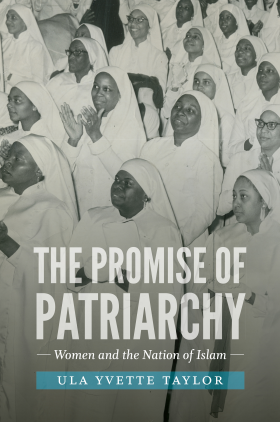 (UNC Press, 2017). The patriarchal structure of the Nation of Islam (NOI) promised black women the prospect of finding a provider and a protector among the organization’s men, who were fiercely committed to these masculine roles. Black women’s experience in the NOI, however, has largely remained on the periphery of scholarship. Here, Ula Taylor documents their struggle to escape the devaluation of black womanhood while also clinging to the empowering promises of patriarchy. Taylor shows how, despite being relegated to a lifestyle that did not encourage working outside of the  home, NOI women found freedom in being able to bypass the degrading experiences connected to labor performed largely by working-class black women and in raising and educating their children in racially affirming environments. Telling the stories of women like Clara Poole (wife of Elijah Muhammad) and Burnsteen Sharrieff (secretary to W. D. Fard, founder of the Allah Temple of Islam), Taylor offers a compelling narrative that explains how their decision to join a homegrown, male-controlled Islamic movement was a complicated act of selfpreservation and self-love in Jim Crow America.

Ula Taylor is a leading feminist historian. She is Professor and H. Michael and Jeanne Williams Department Chair in the Department of African American and African Diaspora Studies at the University of California, Berkeley.

Dreaming in Filipino: Languages and Literatures Beyond English: