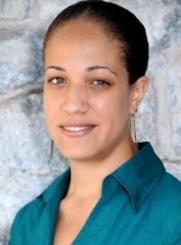 Aisha Finch is an Associate Professor in the departments of Gender Studies and African American Studies and holds a PhD in History. Her research focuses on the study of slavery in Cuba and the Atlantic World, transnational Black feminism, particularly in the Global Hispanophone, and Black political and social movmeents in the Caribbean, Latin America, and the US.  She is the author of Rethinking Slave Rebellion in Cuba: La Escalera and the Insurgencies of 1841-1844.  Broadly speaking, her work explores the radical Black practices of freedom and sovereignty that challenged slavery in nineteenth-century Cuba, and the ways in which transnational genealogies of Black feminism engender alternative readings of the colonial archive. She has also written about Black women’s fugitive ritual spaces as alternative archives; time as both a violent technology of the Caribbean plantation, and a site of black fugitivity and regeneration; and Black feminist practices and reimaginings of care. She is originally from Atlanta and remains a Georgian in exile.