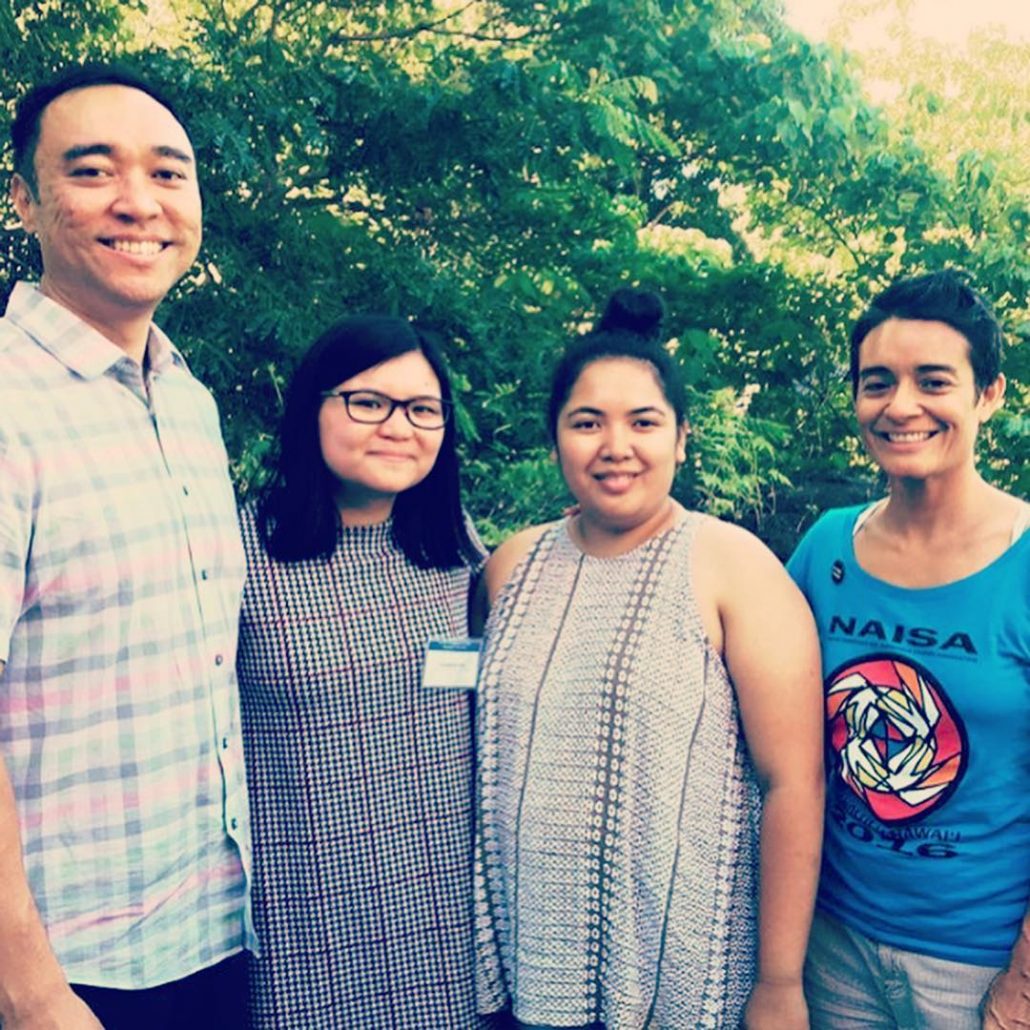 Contextualizing Histories of Dispossession in Oceania

Places like Guåhan (Guam) and Hawai’i are often construed as island paradises, sites of pleasure and relaxation for tourists. Such constructions have consequences. Kanaka Maoli scholar-activist Haunani-Kay Trask argues that tourism is a form of cultural prostitution that destroys Kanaka Maoli or Native Hawaiian land through extraction and erases genealogical ties to place.1 Similarly, Chamorro feminist scholars like Christine Taitano DeLisle, argue that cultural appropriation and extraction support militourism’s destruction of Guåhan, the island where I grew up.2 DeLisle highlights the efforts of maga’haga (women leaders) like Hope Cristobal who protect the indigenous Chamorro peoples’ genealogical ties to place and lead movements to defend Chamorro rights to self-determination.3

Considering Guåhan’s heavily militarized context, I have often wondered what it means for me to be a Pinay settler on Chamorro lands. What does it mean to live in a context of Indigenous dispossession when many Filipinos also carry histories of dislocation and colonization? How can Filipinos unpack their own colonial histories in connection with Chamorros, especially since they have similar ancestries and colonizers?

In my work, I ask how Filipino memorialization of revolutionary Apolinario Mabini in Asan represents constructed historical divisions between Chamorros and Filipinos. Thus, I also analyze how Filipino labor and investment in military occupation is used to support the military and tourism industries’ extraction of Chamorro culture, lands, and ocean.

As Maile Arvin, Eve Tuck and Angie Morrill argue, Native feminist theories can create pathways to imagine alternative futures that resist conceptualizing land as something to be conquered and owned.4 Historically, Filipino settler memorialization of Mabini can be read as a commodification of land into social and political capital, rather than a place Chamorros are genealogically tied to.5 But recent Pinay-led solidarity work suggests alternative possibilities.

The Importance of Pinay Solidarities

Today, Chamorro community organizations like Prutehi Litekyan and Independent Guåhan advocate for Chamorros’ right to self-determination and respect for Chamorro lands. To support Chamorro activists in their struggles against attempts to erase Chamorro claims to Guåhan, various Pinay activists have spoken out against U.S. militarization and settler occupation of Guåhan. These efforts include a recent Independent Guåhan podcast that brought together young Chamorro and Filipino activists to talk about how Chamorro and Filipino struggles are connected.6

The Pinay-led solidarity work that occurs as part of these efforts reveals the importance of centering Native feminist theories that (re)map place.7 By redirecting stories about Filipino revolutionary history and struggle into support for Chamorro sovereignty, our solidarity work represents a departure from the Filipino settler memorialization of Mabini that sought to replace Chamorro genealogical ties and thereby ease Filipino settler anxieties.

Pinay efforts attempt to chart a renewed pathway to solidarity between Chamorros and Filipinos that addresses our interconnected histories of dispossession. I emphasize Pinay solidarities as a way to possibly explain why Filipino solidarity efforts and Chamorro sovereignty movements are often led by women. In this way, I hope to contribute to restoring inafa’maolek, or the Chamorro idea and practice of reciprocal relations, and respecting Chamorro genealogical ties to place in my own work.

Throughout my research and activist work, I have been collaborating with Pinay and Chamorro activists in Guåhan. While I am here in the continent, I have been fortunate to also get to know Pinay activists from Hawai’i, many of whom are now my closest friends. So when I heard that my good friend and fellow Pinay feminist Katherine Achacoso, a PhD student at the University of Hawai’i’s American Studies department, was organizing a conference centered around Oceanic ways of (re)mapping place, I was excited to potentially get some feedback on my project. However, I struggled with raising enough funds to attend the conference until I applied for the Center for the Study of Women’s Travel Grant.

Thus, on October 19-20, 2018, I was able to be in conversation with various scholar-activists that dedicate their work to Oceanic ways of knowing at the (Re)mapping Indigenous & Settler Geographies in the Pacific Conference. Throughout the conference, I was able to have multiple conversations with Filipino and Kanaka Maoli activists, including my mentor and NYU Associate Professor Dean Saranillio, who was one of the conference’s keynote speakers.

Furthermore, I was able to reunite with some of my closest and dearest friends from Independent Guåhan who are currently attending University of Hawai’i at Manoa. As I was presenting my research about Filipino settler memorialization and Pinay activism in Guåhan, I was able to recognize their influence and major roles in my work in ways I wouldn’t have been able to do here in the U.S. continent.

As a result, the (Re)mapping Conference was an opportunity for me to reconnect with my community from back home and also be in conversation with various Pacific Islander and Asian scholar-activists who are dedicated to defending Oceanic ways of knowing and living. Inspired by these experiences, I redirected my thesis’ focus to Indigenous feminisms and Pinay solidarities, which I have described above. Therefore, I am truly grateful for the CSW’s support of my project and the (Re)mapping conference’s organizers, including one of my closest friends Katherine Achacoso, as I have truly been changed after attending the (Re)mapping conference.

Josephine Ong (she/her/hers) is a Chinese-Filipino settler and scholar-activist that grew up in Guåhan/Guam. Her research and activism engages Filipino and Chamorros’ interconnected histories of dispossession and colonization to build collective resistance. Josephine is currently working on a project that unpacks Filipino and Chamorro activists’ different memories about Apoloniario Mabini’s incarceration in Asan.  She received a CSW Travel Grant in 2018.