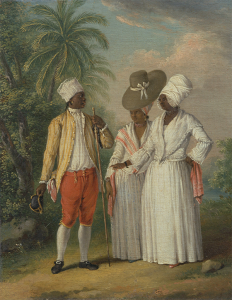 Agostino Brunias’ painting of Carib women and man in the West Indies, 1785

In the late 18th century, people in the Caribbean were constantly reproducing and recalibrating hierarchies of difference. The last decade of the century was especially significant, as islands like Curacao, Dominica, Grenada, Jamaica, Martinique, St. Domingue and St. Lucia  all experienced labor uprisings from the enslaved African populations on their islands. St. Vincent was also contending with warfare, in this case, anti-colonial. After defending the island for over a century from total European rule, the indigenous Black Caribs found themselves in continuous conflict with British soldiers and planters looking to expand their sugar empire throughout the Caribbean. When the island was ceded to the British crown in 1783, a new colonial governance system was imposed throughout the island in an attempt to organize social and economic life in accordance with British colonial logic.1 This included imposing rules that enforced patriarchal hierarchies and established racial divisions between people. The Black Caribs were descendants from Central and Western African peoples as well as people from what would come to be known as South America, and their identity remained unstable within colonial mind and policy. Because indigenous populations were to be exterminated and Black populations enslaved, British officials were in constant limbo on how to conceive of people who qualified for both identities, but ultimately did what they wanted to do and thus undermined British colonial logic.

In 1790, Anne Barramont was a Black, indigenous, free and land-owning elder living in Ribishi, Saint George Parish. A few miles away from Kingstown, Ribishi was located just adjacent to the British colonial administrative and commercial center of St. Vincent.2 Her position as a property-owner, living in close proximity to the largest British settlement on the island, demonstrated an embodied rejection of colonial ideas of identity and restriction: she was Black and indigenous; savage and subject; and a woman. As a potential participant in an Atlantic market of ownership and land transactions, Anne’s status reveals the sometimes contradictory and changing dynamics of race, identity and subjectivity in the Caribbean.

In a correspondence to the then-Governor of St. Vincent, found at the National Archives in London, she was strategically racialized as Caraibess, indicating an indigeneity to the land, that excluded her and her family from the implications of Black personhood in the Caribbean. The document reads:

Many things are revealed in this petition, both apparent and hidden. First, Anne had an entire family around her, and she was the matriarch. The petition states she was a widow, which means her partner Pierre Barramont had died prior to 1790. They had three children together—Celeste, Marianne, and Rosalie. The document claims that each person–Anne, her late husband and their three children–each possessed a what they minimized as a “small lot of land” in Ribishi. Anne Barramont and her late husband Pierre were likely figures of high social standing on the island. Their names reveal that they were both allied with and in communication with French soldiers and officials, connected to networks possibly spanning into the nearby French colony of Martinique. Their names also signify that they were proficient in French, which was a skillset learned not through educational institutions, but through proximity with the French during the 1780s. Because of the size of their lot and location, Pierre Barramont was likely a military official in a Black Carib army or French defense unit on the island, both parties that were emphatically against British domination.

Not only did Anne and her family subvert being racialized as Black (which under colonial logic and in plantation societies, called for enslavement), but they were also protected from the genocidal implications of indigeneity because she the property owner of 45 acres of land in St. Vincent, a fairly large plot. Moreover, she was a woman who owned land, which wasn’t rare, but certainly wasn’t prevalent on the island. Her land grant had been effective since a decade prior, and ratified through French colonial administration in Martinique. The Barramonts were one of few families who had been formally granted land by the French, in non-Carib territory.4 The land grants were upheld on the condition of “non-alienation,”5 ie: with continuous consent from the colonial administration’s commander and chief, even as ownership of the island transferred from French to British hands. This was likely an attempt to prevent the Barramont family from joining or assisting oppositional Black Carib forces and the French army. The non-alienation condition helped officials keep tabs on a Black and indigenous educated woman who was allied with the French metropole and thus a very real threat to the burgeoning English colony. Whether the sale of her and her family’s property was coerced or done willingly, Anne Barramont’s experiences were shaped by the intersecting and insecure logics of race, class, gender and ownership. Her story is one of many that eclipses the boundaries of the image of strictly white, wealthy men as property owners.

Stories such as this one suggest ways of being that expand our current understandings of identity. Anne Barramont used categorical markers to various advantages, and moved through the island undeterred by the limitations of imposed identities. She stretched the meanings of them in new and liberatory ways, fashioning herself as more than a fixed identity or relationship to the colonial state.

Today, identities have taken new shapes and forms, contingent on our locations and condition. Because of the quick nature of information-sharing through technology, these understandings are often stagnant and flat, doing a disservice to the wonder and dynamism of the lived experiences of people. Contemporary understandings of identity have also evaded an intersectional analysis, oftentimes evoking the term incorrectly to further reify race and gender.6

Identity was and still is, fluid and contextual. It is often something we refuse, but also something we reclaim, and expand upon. While investment in identity is certainly a layered practice, past narratives can complicate our allegiance to these logics of differentiation. Stories like Anne Barramont’s prove that the creation of race, class, gender and citizenship was a wildly unstable project. A project that still today, can and must be critically subverted.

Thabisile Griffin is a graduate student in History at UCLA. In 2018 she received the Penny Kanner Dissertation Research Fellowship from the Center for the Study of Women.