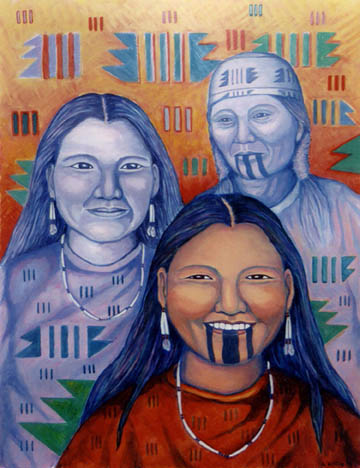 “One Elevens Return” by Lyn Risling of the Karuk, Yurok, and Hupa tribes of Northern California. (http://lynrisling.com)

The mission system in southern California and the gold rush in northern California were eras of apocalyptic violence deliberately enacted by settlers seeking to dispossess Native peoples of their lives, land, and labor. The exploitation of Native peoples’ labor was essential to the colonial project and was obtained by settlers with the use of force. While many scholars of California Indian history have published about the genocide enacted against Native peoples which undergirded the development of the settler state of California, the language that historians have frequently deployed falls short of framing Indian labor as slavery. Many historians instead rely on the language of the colonial archive, using words such as indenture, apprenticeship, concubinage, and custodianship. I am interested in interrogating the language used by historians around Indigenous slavery and its political stakes. Ultimately, I argue that the failure of historians to deploy the language of slavery consistently in their analyses of California Indian genocide upholds the narrative of the settler state and erases the violence of captivity while replacing it with the sanitized langue of state benevolence.

Using the explicit language of slavery in this context accomplishes two goals. The first is to speak plainly about the violence of enslavement in a way that honors the tens of thousands of California Indians whose lives were destroyed by those systems. Terms such as custodianship and concubinage, I argue, do not come close to conveying the horrors of sexual violence, corporeal punishment, and quotidian humiliation that these Indian children and adults experienced. What’s more, the impulse of some scholars to measure and compare levels of coercion is ethically untenable, repugnant, deplorable, and relies on the definitions of indenture put forth by the state to absolve itself of being a slave state. The second goal is to challenge arguments put forth by historians who claim that the binary free/slave flattens an analysis of regimes of labor. By using the language of slavery, I’m attempting to undermine the argument that the definition of slavery does not or cannot extend to the genocidal procurement and exploitation of Indian women and children.

I also seeks to discredit the binary of free or slave in the context of a genocide where the meaning of freedom for Indian people was constantly in flux. Using the language of slavery rather than other terms for systems of coerced labor exposes the contradictions of a state which claims to be an inclusive liberal democracy even though it is founded on the genocide and enslavement of Native peoples. The political outcome of exposing this central contradiction is yet unknown but one hopes that it may have an impact on how Native peoples articulate our desires for a future. If the state could not exist as it currently does without the exploitation of Indian slaves, then Indian people should be compelled to look beyond the state for a future for themselves. Naming the atrocities of the state in explicit terms produces a set of political stakes that historians are perhaps not prepared to contend with, but it behooves Indian people to move beyond the limits of that scholarship.

I began my exploration of the language deployed in analyses of Indian slavery in California with the work of Benjamin Madley due to the overwhelming popularity of his book, An American Genocide. Madley’s analysis, although grounded in work by other scholars from decades before, has been heralded as groundbreaking as a result of his extensive archival research which documents the deaths of thousands of California Indians. However, what his work fails to do is interrogate the narrative of the archive he investigates. Like other historians, Madley relies on the language of The Act for the Government and Protection of Indians which states that California Indians be placed under labor systems of indenture and apprenticeship for their own good. Madley somewhat uncritically adopts the language of the law without challenging the political stakes the state has invested in avoiding the language of slavery. To his credit, Madley does call this system “de facto slavery” but insists that legally it was a different system of labor exploitation that requires a separate taxonomy. The difference between de facto and de jure slavery is evidently significant since Madley is so careful to keep to the precise language of the archive. As a result, his work lacks a critical conversation with the archive, leaves the narrative of the state intact, and absolves the state of holding California Indians in several different systems of slavery for decades.

My argument is not meant to disparage existing historical research, but rather to demand more from historical method. California Indian peoples should not be satisfied with easy linear narratives of state violence and must instead insist that the epistemological power of the state be made visible through critical conversations with archival sources. Emphasizing the language of slavery is no mere matter of semantics. The stakes are nothing less than how we envision our futures as Indian peoples.

Stephanie Lumsden is an enrolled member of the Hoopa Valley Tribe in Northern California. She is a PhD Student in Gender Studies at UCLA. In 2017-2018, Lumsden was the recipient of a CSW Travel Grant.