By Andrea Ford, University of Chicago

On a warm October Friday in 2014, during my anthropological fieldwork on childbearing in the Bay Area, I was walking down a Santa Cruz sidewalk towards the Ugly Mug coffeeshop. Its windows were lined with clay mugs sprouting grotesque faces in the tradition of gargoyles, with a hippie-craft twist. Inside, I met a number of other doulas and members of the “birth community,” many of whom I recognized. We were gathering for a film screening of Microbirth. The title is a play on microbiome, describing the microscopic lifeworlds that inhabit and compose our human bodies, influencing our health in myriad ways that are only just coming to light.

The film’s poster is Earth seen from space: a faintly luminous horizon beneath dark sky and stars. There is a magnifying glass over the “O” in the title, within which floats a shadowy fetus. The play on scale illustrates the film’s claims: here are minuscule ecologies with enormous consequences. In thinking over this film screening and other incidents from my fieldwork, I have become increasingly interested in the many ways “toxicity” intersects with reproduction. Participating in CSW’s Chemical Entanglements Symposium in 2017 shaped my thoughts about microbial vulnerabilities to chemical environments, and the ways these implicate human health and reproductive ecologies. Can sterility — a lack of microbes — be considered toxic? 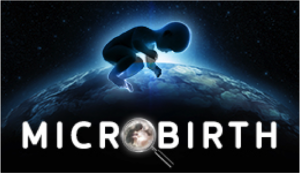 A year and a half before the evening of the film screening, the New York Times Magazine published “Some of my Best Friends are Germs,” a cover story by celebrated American food journalist Michael Pollan. Pollan writes that there are 10 microbes per every human cell (making us “10 percent human”) and that “To the extent that we are bearers of genetic information, more than 99 percent of it is microbial.” He claims American guts are microbially impoverished, due to an industrial diet of processed foods, high antibiotic use in medicine and agriculture, living in increasingly sterile environments, and low rates of vaginal birth and breastfeeding. Communities of microbes live in the gut, on the skin, in the eyes and mouth, up the nose… yet the fetus is microbe-free. It is sterile in its amniotic sac (though not impervious to chemical damage and influence).

Where, then, does our microbial universe come from? Pollan describes how, during birth, the fetus is “colonized” by the vaginal microbiome through which it passes, which means that it is covered with the bacteria of the highly non-sterile person who birthed it. This is followed by contact with her skin and her breastmilk, each of which has its own microbiotic ecology. Babies born by Caesarian miss out on this colonial event, and have different microbial gut communities, which might affect their immune development and account for higher rates of allergy, asthma and autoimmune problems in C-section babies. A newly born child’s microbial colonies are further encouraged via breast milk. The “mystery of milk” was one of scientists’ earliest clues to the microbiome: breastmilk should be food perfectly engineered by evolution, so why does it contain sugars which are indigestible by infants? Scientists puzzled about the presence of these sugars, called oligosaccharides, for decades, and formula companies didn’t include them in their products. Now it is known that oligosaccharides are actually “prebiotic” – that is, food for bacteria. Instead of nourishing the baby itself, they are eaten by Bifidobacterium infantis; healthy levels of these bacteria keep harmful microbes at bay and ensure that the lining of the intestines, which is critical to preventing infection and inflammation, is healthy. Furthermore, breastmilk transfers the mother’s immune system to the baby in real time, priming her for the actual pathogens she is encountering, and contains antibodies that kill harmful bacteria and viruses on contact, yielding “old wives tales” like using breastmilk to relieve infant eye infections.

Back at The Ugly Mug, Microbirth picked up where Pollan’s article left off. Although the film’s rhetoric could be alarmist and hyperbolic at times, it raised many provocative questions and convincingly asserted that patterns of health are impacted by practices near birth. It emphasized the importance of vaginal births, breastfeeding, and immediate skin-to-skin contact between infant and birthing person, then introduced “vaginal inoculation.” When c-sections are inevitable, says Dr. Maria Gloria Dominguez-Bello, professor of Medicine at NYU, the newborn can be swabbed with vaginal fluid to simulate “colonization” during vaginal birth. This “vaginal swabbing,” another term by which it is known, is under formal clinical trial in Puerto Rico, led by Dominguez-Bello.1 The film claimed that the first few moments of non-sterile life are the “one chance” babies’ guts have to learn which microbes are good, and which are bad. It described bodies as ecosystems, which, like other ecosystems on the planet, are shrinking in biodiversity. This led to thinking about health in ways that transcend the individual: our lifestyle has corrupted not our bodies, but our ecosystems; people are not sick, “the system” is. The film gestures towards an “antibiotic winter” when antibiotic-resistant bacteria will be unstoppable, expresses concern that an interconnected world will soon make pandemics inevitable, and says that non-communicable diseases (NCDs) will bankrupt our healthcare system.

Most striking is the idea that compromised microbial ecosystems are not just related to the diseases of a generation, but that consequences are heritable. Microbial genes outnumber human genes in a human adult by a factor of at least one hundred to one; it appears increasingly likely that this “second genome,” as it is sometimes called, exerts an influence on our health as great and possibly even greater than the genes we inherit from our parents. But while inherited genes are more or less fixed, it may be possible to reshape, even cultivate, the second genome, a process which spans generations. Epigenetics studies how the environment affects gene expression, which can vary over the life of a cell, a person, a species; some changes are heritable, some don’t persist after the individual cell reproduces. Epigenetics and the second genome are dynamically intertwined in ways scientists don’t understand. The temporal frame of this dynamic lends present actions generation-spanning significance, and also brings the embodied choices of past generations to bear on present circumstances. Detrimental epigenetic consequences of improper microbial colonization might be mitigated by swabbing a new baby with vaginal fluid, but the microbes present in the vaginal fluid depend not only on the childbearing person’s health and hygiene practices, but those of her mother and grandmother. There is a “maternal microbial heritage,” which is compromised by c-sections, artificial hormones, and formula, among other things. The film ends with a call for big research into the question “how do we know we’re not altering the course of humanity?”

The uptake of this film among the birth worker attendees, and in the community at large, is something I discuss elsewhere (Ford 2017). What I’m interested to suggest here is that the complex web of concerns spanning outward from the microbiome and its reproduction should be thought of in conjunction with concerns about chemical toxicity in daily life. Antimicrobial products are ubiquitous in American households and workplaces. An emphasis on personal hygiene and chemically “clean” spaces in urban/suburban settings has removed much of our exposure to microbial life. Chemicals in our food systems have largely unknown effects on our resident bacteria. Minimizing exposure to “germs” after Pasteur’s attributed discovery had immensely positive consequences for medicine and public health, but it increasingly seems there can be “too much of a good thing.” As Illich argues in his 1973 theory about technological watersheds (with specific reference to hygiene, antibiotics, and iatrogenesis: when medicine causes illness) there is a point beyond which a development that is beneficial to human society outgrows its own utility and becomes a burden. Chemical technologies have passed this threshold, taking on a life of their own and affecting humans in ways we don’t fully recognize, and which are neither determined by us nor for our benefit — not to mention the benefit of the complex multispecies ecologies of which we are a part.

Andrea Ford is a cultural and medical anthropologist who received her PhD in Anthropology from the University of Chicago in 2017. She received a CSW Travel Grant in order to participate in the Chemical Entanglements Symposium in May, 2017.