“Concepts are at work in how we work, whatever it is that we do. We need to work out, sometimes, what these concepts are (what we are thinking when we are doing, or what doing is thinking) because concepts can be murky as background assumptions. But that working out is precisely not bringing a concept in from the outside (or from above): concepts are in the worlds we are in.” 1 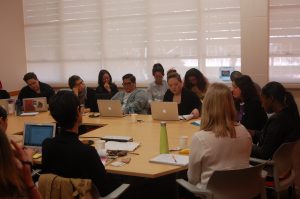 UCLA Graduate Students participated in a seminar with Dr. Sara Ahmed on February 13, 2018.

Like many, I came to Sara Ahmed’s writing through her more public-facing work on her blog and Twitter, rather than through her academic publications. My first such encounter was with a blog post re-published on The New Inquiry in the summer of 2015, an essay called “Against Students” already inflected with a Twitter idiom of terse aphorisms.

Ahmed is personable, in this essay, willing to indulge herself and her senses (including her sense of humor). “We sense the vigour of the sweep,” she writes, “What a sweep!” And later: “Sweep, sweep. Beep beep. Error message.”2 As an essay on the political convenience of problem students, on “the moral panic about moral panics,” “Against Students” became a touchstone for myself and my friends –– almost literally, something for us to come back to and touch in order to reassure ourselves that we weren’t unreasonable, over-sensitive, controlling. (Still a hilarious, though widespread, narrative of campus controversies.) As we dealt with the aftermath of our own complaints, we held Ahmed close.

I don’t know what Ahmed’s wide-ranging writings mean to others; I know that for me, “Against Students” was a turning point and a lifeline in the midst of a messy departmental drama, and that her 2017 book Living A Feminist Life is a powerful follow-up on the same issues. I had been spooked by the mockable archetypes that circle a complaint against teachers; I had been constantly careful that no critique I tried to make could be received as that of the “morally panicked” student. But over the course of so many re-readings, Ahmed’s scapegoat-constellation of “the consuming student, the censoring student, the over-sensitive student, and the complaining student” became figures of Muñoz-like disidentification instead, figures I could both occupy and laugh at –– figures I wanted to invest with life, as Ahmed does.3

When Ahmed visited campus for her talk, “Complaint as Diversity Work,” and a graduate seminar on her recent book, she emphasized this kind of disidentification from a different vantage point –– that of institutional complicity. Her writing in Living a Feminist Life has the same rhythms as “Against Students,” with its brilliantly self-indulgent repetitions, jokes, and interludes, and with that Twitter-patter of minute repetitions and adjustments. There, too, she tries to arrive at a description of being stopped, or of being swept up and out, from the position of complicity. One has to encounter a place (a classroom, a brick wall), and possibly occupy it, in order to realize how it blocks your body.

At the graduate seminar, Ahmed answered questions about complicity by rephrasing it as a possible starting point, rather than a bad feeling to brush off. “A leak can be a lead,” Ahmed said at her talk. “Complaints that do not seem to lead anywhere may lead us to each other.”4 Put differently, Ahmed wants us to pay attention to when spaces are comfortable for our bodies and lives, and when they aren’t. Our comfort may be someone else’s brick wall.

I wonder how to live up to Christina Sharpe’s injunction to “Refuse reconciliation to ongoing brutality…. Rend the fabric of the kinship narrative.”6 Even now, I can’t be indebted only to the people I’d like to be –– those who I feel humbled in citing, like Ahmed herself or Sylvia Wynter, Gayatri Spivak, or Hortense Spillers (or any number of my most brilliant friends, wading through institutions of their own, who are a joy to owe myself to). My relationship to academic work has also been shaped by those I choose not to cite, by those I choose not to admire as mentors. I owe them an instructive influence –– sometimes as an instruction of what I’d rather die than reproduce, and sometimes as what I do, still, find invaluable and beautiful. What should be reproduced? What can’t help but be reproduced, if you are not careful and sensitive to phenomenological experiences you can’t yourself perceive?

It is a relief, once again from Ahmed, to think of my complicity and indebtedness as a hermeneutic starting point. I am here: what can I learn by being here and attending to how a place fits my shape? Can I occupy the “problem student” figure, not in the image of heroic radical but as one more fragile feminist, sensitive to the contours of “inclusive” institutions?

In Living a Feminist Life, Ahmed tells us, “I make arguments by listening for resonances; the book thus involves repeating words, sometimes over and over again; words like shatter, words like snap. The repetition is the scene of a feminist instruction.” 7 I take her methodology as an instruction in itself, to reproduce with careful difference, repeating and listening for slightly altered resonances.

What can any of us do with the ambivalent knowledges created by the university as it is? What lines of desire may we trace differently than our predecessors? Following Ahmed, I hope to warp my debts to fit my own purposes, and to reproduce the best of what I owe.

Tony Wei Ling is a graduate student in the Department of English at UCLA who participated in a graduate seminar with Sara Ahmed hosted by CSW on February 13, 2018.