Little did I anticipate when I chose to study the history of suburban life in Los Angeles, 1945-2000, that it would resonate so clearly with political events unfolding around us. In the wake of Donald Trump’s campaign and victory, I’m convinced more than ever that the suburbs of Los Angeles have a lot to teach us. Trump’s vision was a pining for a lost America, captured pretty well, I think, in the image of white nuclear families living the good life in the suburbs, replete with decent wages, affordable home ownership, good schools, and similar neighbors. The suburbs of Los Angeles used to be that, no question. But their history also tells a powerful story of transformation, of places that mostly let go of that saccharine, segregated experience. It’s a story of an unrelenting if potholed progression from white, heteronormative family life to multiplicity. That process happened more smoothly in some places than others. And in some, it didn’t really happen at all. But on the whole, the suburbs of Los Angeles County present rich and instructive stories about how communities dealt with the inexorable evolution toward social change and demographic difference.

This story is important because the suburbs are now the domicile for a majority of Americans. As of 2000, 50 percent of Americans lived in suburban communities and – despite all the talk of a “back to the city” movement – the percentage has continued to climb, hitting 51 percent in 2010. And as more and more Americans settled the suburbs, suburbia was coming to look more and more like America itself. A crucial turning point was the 1970s. After that year, the suburbs gradually became home to a wide cross-section of Americans – singles, divorced adults, gays, lesbians, the elderly, the poor, and perhaps most dramatically a wide range of ethnic and racial groups. While African Americans, Latinos, and Asian Americans comprised barely 10 percent of the suburban population in 1970, by 2010 they represented 28 percent. And from another angle, a clear majority of nearly all ethnic and racial groups, as well as immigrants, now reside in the suburbs.[1] This demographic reality upends the traditional association of suburbia with white privilege, suggesting new, if complex, dynamics about the relationship of space to race and ethnicity.

The suburban family profile similarly changed. Since 1970, the proportion of working women rose considerably, shattering earlier images of suburban housewives trapped at home. By 2010, 75% of suburban homes did not contain a married-couple family with kids, exploding the old image of Ward and June Cleaver ruling the roost in the ‘burbs.[2] And while statistical data on the social geography of LGBTQ is elusive, a range of evidence suggests gays and lesbians also migrated to the suburbs.[3] One catalyst was a shift in federal housing policy, specifically by the U.S. Department of Housing and Urban Development, which altered its definition of family away from heterosexual “marital or biological attachments” toward a more pluralist concept that would include “any stable family relationship,” including LGBTQ households.[4] The powerful image of heterosexual “married with children” families in suburbia was giving way to more complex family structures that mirrored national social change.

Los Angeles presents a rich setting for exploring these transformations. It contains a wide range of historic suburban landscapes which provide both spatial context and object of spatial production. And as a global metropolis, Los Angeles presents a wide array of suburban demography – in terms of class, ethnicity, race, religion, gender, and age. Immigration and transnationalism played an increasingly important part of this story, since Los Angeles stood at the vanguard of immigrant suburbanization. Census data since 1950 shows a dramatic flip-flop, from a bulging majority of all-whites towns in the 1950s and 1960s to across-the-board ethno-racial diversification. By 2010, the composition of L.A.’s suburbs was 47.8% Latino, 27.1% white, 15.5% Asian, and 7.3% black. This dynamic created a context of lively diversity intermingled with intense white anxiety. These tensions defined stories of suburban metamorphosis and stasis, receptivity and resistance. 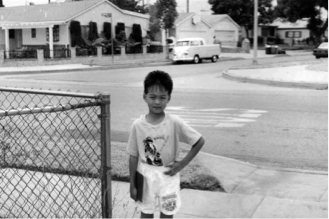 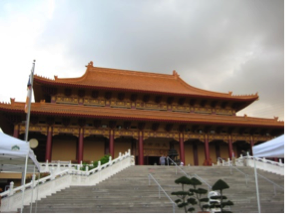 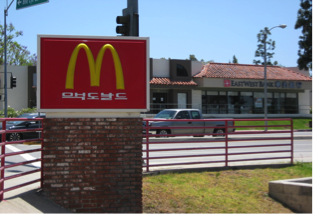 My research cuts into these processes from several angles. By using case studies, I explore how social and civic life evolved in L.A.’s suburbs over a half-century period. I hone in on several themes which I believe are crucial to understanding evolving social and civic dynamics – race, class, immigration, gender, children, the lifecycle, and the built environment itself. Each case study foregrounds one or two of these themes, while exploring the others in secondary ways. While my work is still in progress, my research thus far suggests astonishing variations in the suburban experience. I fully believe that any attempt to generalize about suburbia – whether about social and civic culture or even a concept like “the suburban vote” – oversimplifies life on the ground, and would be akin to trying to generalize about “America” itself.

I offer a few examples. One is San Marino. This stately, affluent suburb northwest of downtown Los Angeles was a community whose roots intertwined with the crème de la crème of elite L.A – the Huntingtons, the Pattons. Since the 1970s, it has become a favored destination of wealthy Chinese immigrants, many cosmopolitan in outlook and everyday routines. Like their Anglo counterparts, they came for the town’s fine schools and reputation as a dignified, old money enclave.   What they encountered was a town with deeply rooted traditions of community, aesthetics, and local identity, all bound together by a robust culture of voluntarism. In contrast to some affluent suburbs whose only social cohesion rested on a flimsy basis of a shared allegiance to NIMBYism, San Marino was a town where community actually had social meaning. And social and civic participation remained robust, even through the dramatic ethnic transformation. San Marino, in effect, became a critical site where Asian suburbanites learned American democracy. In seemingly trivial activities around schools and neighborhood, participation itself emerged as an explicitly American value – sometimes the flashpoint of ethnic conflict, other times the incubator of assimilation and interethnic shared social experience.

Like most picturesque enclaves, San Marino’s affluent status was predicated on a local culture of stasis. With a confident sense of the town’s high value – social, aesthetic, and property – residents united around a shared belief that you don’t change what works. You protect it. And you cement it in place, as much as possible. This community philosophy applied to the built environment as well as social life itself. When immigrant newcomers confronted this firmly settled milieu, their only real path to local acceptance was assimilation. They had to learn the ways of suburban affluence – whether that meant embracing local design aesthetics, participating in critical sites of local social life, serving politically, or upholding the tools of class exclusion.[5] In so doing, they reproduced the internal elements that ensured the remarkably consistent appreciation of local property value, even in periods of economic downturn.

Lakewood presents a very different context. A postwar mass-produced suburb in southern Los Angeles, Lakewood drew national attention in the 1950s when it became the largest development in the country – with 17,500 homes – surpassing even Levittown. Lakewood eventually became a site of robust multiethnic diversity: by 2010, the population was 40.9 percent white, 30.1 percent Latino, 16 percent Asian, and 8.3 percent black, making it one of L.A.’s most racially balanced towns.[6] The irony was thick. A suburb once reviled for its monotonous landscape – which supposedly churned out monotonous, conforming people – had become the staging ground for racial and ethnic diversity. In some ways, this was no surprise since these communities, which were originally built to be affordable, maintained that quality once nonwhite buyers gained the economic wherewithal to become suburban homeowners and the barriers to racial segregation fell. 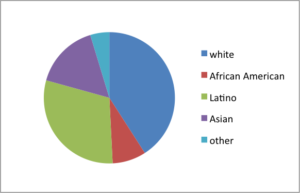 In Lakewood, I will be exploring the ways that gender, age, and the life cycle shaped local community life, through this remarkable change. Women played a nuanced role as suburban participants over time. As major community players during the 1950s and 1960s – in endeavors ranging from the social to the political, all across the partisan spectrum – their growing participation in the paid workforce as well as changing ideas about motherhood subsequently impacted this participation in critical ways. Also in play were changing conceptions of motherhood and child rearing styles. Among the white middle class, from the alarmist notion of neurotic motherhood that evolved in the 1950s to the surge in hands-on parenting since the 1990s, these evolving practices helped re-configure women’s role as suburban community participants. Simultaneously, non-white suburbanites brought their own child rearing practices into diversifying communities, which sometimes acted as lightning rods for local social relations. The lifecycle also represents an important way of approaching questions of suburban social and civic life. Experiences varied significantly as suburbanites progressed through the life cycle, from childhood to old age. Children often acted as that first, important social glue in suburban communities, uniting parents around activities in the schools, sports, and even philanthropic organizations. At the same time, children’s experiences as suburbanites changed markedly over these years, particularly their constricting sense of freedom in suburban space. This stemmed from a confluence of factors – the “suburban crisis” of the 1970s which heightened parental anxiety about public safety and crime, changing school cultures and spatiality, and evolving and diversifying parenting practices. As children’s experience changed, so did the broader suburban social and civic landscape.

A very different suburban story played out in the working-class Latino suburbs of southeast Los Angeles, the heart of the “gateway suburbs.” In these communities, new immigrants forged distinct lifeways, cultures, and politics that challenged historic suburban tendencies.   Indeed, probably the most radical assault upon the image of lily-white-Ozzie-and-Harriet suburbia was the emergence of open, expressive ethnic suburbs. It showed up in the splashes of signage in Spanish, street vendors hawking chicharron and fruit, hybrid retail spaces like the Plaza De La Fiesta of Huntington Park where the skeletons of American suburban mini-malls were reincarnated into ethnic spaces that felt familiar and comfortable to immigrant suburbanites. It also appeared in the architectural flourishes of homes – the white-painted wrought iron fences and the robust uses of front yards for the selling of goods. Housing also posed opportunities and radical constraints, forcing a new reckoning with the meaning of “home sweet home.” In southeast LA, the upsurge in “informal housing” – garages converted to housing, for example – not only created high density, but an entire web of economic, social, and political relations. My book will explore these and other dynamics in L.A.’s Latino suburbs.

Despite the claims of some naysayers that the suburbs are “dying,” American suburbs in fact have continued to grow and diversify. In a setting like Los Angeles, that diversification has accelerated at a rate that may lead the nation, but may also represent a harbinger of things to come across America. The better we can understand the civic and social dynamics of these places, their histories and the forces that shaped the possibilities for democratic community experiences, the better we may shape policies that promote successful, equitable metropolitan places. This is not just a suburban history, but an American history, revealing how social and civic life has been unleashed and constrained by the new suburbia.

[4] Ian Baldwin, “From Metro to Hamlet: How Gay Liberation Shapes Space and Politics in L.A. County” (Ph.D. dissertation, University of Nevada Las Vegas, 2016). While this definition initially applied to low-income families seeking housing aid, it set the tone for a broader federal housing policy that “opened the door to queer recognition.” In conversation, Baldwin suggested that this also likely created a shifted climate for gay suburban access as well. (Los Angeles, Nov 2015).

[5] The design side of this story is explored in Becky Nicolaides and James Zarsadiaz, “Design Assimilation in Suburbia Asian Americans, Built Landscapes, and Suburban Advantage in Los Angeles’s San Gabriel Valley since 1970,” Journal of Urban History (published Online First, November 5, 2015).