To say feminists have complicated relationship with pop culture would be a gross generalization of an extremely prolonged and heated debate on various forms of pop culture and its relationship with women. Occasionally, snippets of the feminist debate in regards to U.S pop cultural contexts circulate in society. For instance, are femme fatales in movies feminine models or are they one of many caricatures of women that Hollywood utilizes to depict aggressive womanhood? Is Taylor Swift feminist? How about Beyoncé? These debates are fascinating and impactful because U.S pop culture does not only cater to the U.S audience but also to the fans around the globe, but I want to turn attention to Korean pop culture here.

In the last decade or so, Korean pop culture has successfully been reaching out to audience outside of Korea. The phenomenon of Korean pop culture being popularized outside the Korean peninsula is called the Korean Wave (Hallyu). The phenomenon has multiple components ranging from entertainments to the likes of artistic films, K-Pop, television dramas, and talk shows. Some folks who become hooked to Korean entertainment extend their interest to broader Korean culture they saw on their favorite films or television shows. For instance, Suray Agung Nugroho points out some Indonesian fans of Korean pop culture consume Korean fashion items in addition to the usual DVDs and music files (Nugroho 2014). Some people even extend their love for the pop culture to take the time to learn Korean language so that they not only understand the lyrics or phrases more thoroughly but also to actively seek out other pop cultural materials or news related to their favorite Korean pop stars that may not have been translated into their native language (Sotirova 2014). However, for some fans, getting access to Korean pop culture through screen is not enough. They feel the desire to actually visit Korea and immerse themselves in the scenery, food, and language that they experienced through their television or computer screens.

Pop culture inspired tourism isn’t a new phenomenon. Tourists have been visiting Disneyland and Hollywood, Japanese anime fans visit cities where their favorite anime takes place, and people who saw the beautiful scenery in Lord of the Rings trilogy flocked to New Zealand, so Korean Wave induced tourism is one of many cases of visual media inspiring audience to invest time and money to physically situate themselves in the culture within the media. Over the summer of 2015, I had the chance to go on some of these tours myself. A brief online search provides fans with information on where each drama scene was filmed. Korean films and television dramas are filmed all over the Korean peninsula. For this research, I limited myself to the locations within Seoul. I referenced the information on Seoul’s official tourism home page “Visit Seoul” which provides thematized tour suggestions for the inquiring mind.[1] I focused on the locations that are linked to Korean television dramas because my interest was in seeing how the television dramas manifest themselves on the Korean landscape as well as to see how the actual Korean landscape lives up to the utopic land of romance that it is painted out to be in Korean television dramas. 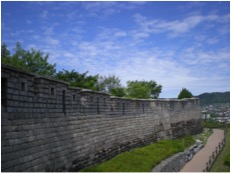 One of the places I visited was Naksan Park (see photo at left). It is a path on top of a wall that surrounded old Seoul. The location underwent major renovation in the middle of the 20th century from a dilapidated wall into a clean and friendly park. Although the location always had historic significance, it took on a whole another level of meaning and significance through its depiction in Korean television dramas as romantic dating locations. In the official Seoul tourism website, the point of emphasis in the description of the place is not on the historic significance of the park but on its presence in various television drama scenes as a space where romance happens between the hero and the heroine. 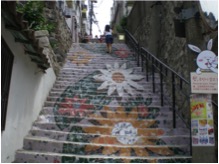 Even though such  filming locations as Naksan Park are being iconized online as the location to visit for Korean television drama fans, the actual park itself has no signposts or placards memorializing the filming of television dramas. In a sense, the significance of the location for the tourists lies within their own memories. The only way the television drama scenes and the actual locations are linked is via the recollection of the fan-tourists’ seeing the location as romantic and memorable place on their screen. The fans become active mediums through which an otherwise ordinary park turns into a place of love. Similar to Naksan Park, Ihwa-dong Mural Village (see photo at right), which is often romantic dating locale in television dramas, has no visible signs commemorating filming. However, tourists milled around specific murals that were portrayed in the dramas rather than the ones that were not depicted, thereby revealing how the fan-tourists’ recollection can sanctify a specific geographic location in Korea. 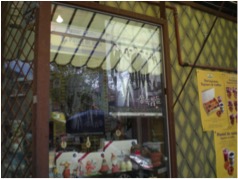 Contrary to the public places, private shops were invested in selling themselves as the location where television dramas were filmed. For example, a bakery where a very popular drama was filmed had the poster of the drama hanging on its front window couple of years after the drama went off the air (see photo at left). The commercial shops having posters or other signs relating the shop with the television dramas make the romantic significance of the shop a bit more accessible even to people who may not be as fanatic about the dramas as the fan-tourists. Perhaps such blunt connection is necessary to derive the most benefit in the short amount of time because the turnover in popularity of Korean television dramas is pretty quick. Dozens of dramas go on air and get exported to other countries, and so the popularity of one drama does not last long. Moreover, the commercial shops themselves where the dramas were filmed are in a precarious position as well. In one instance when I attempted to visit a cafe where a popular Korean drama was filmed, the shop was gone; it had turned into a restaurant. The entire geographic location where fan-tourists could come and relive their romantic fantasies was gone.

How might such pop culture motivated fan-tourism be a feminist project? Apart from majority of Korean pop culture fans being women-identified, the collective and at the same time separate fantasy which Korean television dramas enable can very much be a feminist project. According to media scholar Ien Ang, “fantasy and fiction can play a distinctive role. They offer a private and unconstrained space in which socially impossible or unacceptable subject positions, or those which are in some way too dangerous or too risky to be acted out in real life, can be adopted” (Ang 2007, 243). The television dramas not only offer fans a concrete visual material basis to use for their individual fantasies but also provide them with a sense of collective fictional space where women’s romantic desires are not shoved aside as frivolous.

Whether the content of the dramas themselves and their depiction of women characters are empowering for women are up for debate. One could easily make an argument that the plot of the popular television dramas still adhere to the heteronormative and patriarchal social standards and thereby depicts women characters as ones who are stagnant sexual objects as opposed to agentic figures (Mulvey 1975). Despite the questionable status of the Korean television dramas, I contend those visual entertainments should not just be disregarded by feminists as yet another heteropatriarchal entertainment, because the predominantly female fans’ interest in the shows and how they use the shows to create individual as well as collective female domains of romantic desire cannot be ignored. Those desires and fantasies are not just something that exists within the fans’ minds; the desires manifest themselves into reality through economic and cultural exchange between Korea and multiple countries as well as aiding in foreign affairs between Korea and other nations. Korean television dramas and their fan base provide rich material with which we could explore female desires and its significance in social modality.

Min Joo Lee is a graduate student at the Department of  Gender Studies at UCLA. She received her B.A in Comparative Literature and Women’s Gender and Sexuality Studies at Williams College. Her current research interest is the intersection between Korean television, gender, sexual identity, and nationalism.