Award winners from the 2015 ASTR conference. I am in the navy blazer four from the left. Fellow UCLA student, Shamell Bell, was also an awardee at the conference; she stands six from the right, roughly centered in the photo. 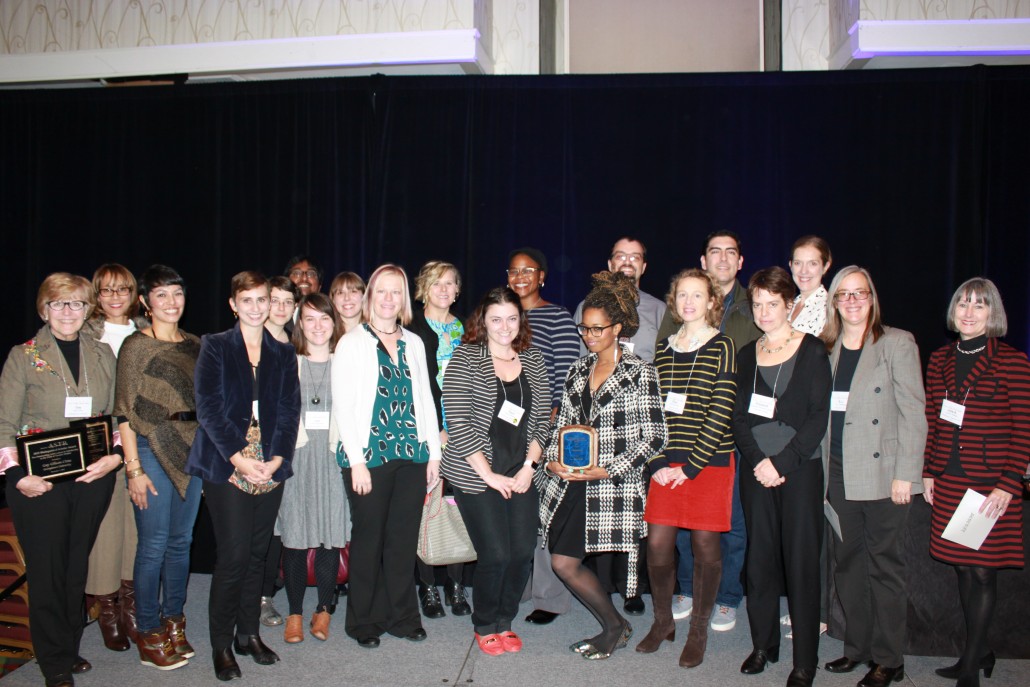 In November 2015, I attended the annual American Society of Theater Research (ASTR) conference. Held in Portland, Oregon, it was the third ASTR conference I attended, and my travel was funded through a Center for the Study of Women Travel Grant. ASTR’s format is somewhat unique to academic conferences. Conference proceedings are predominately made up of working groups. These groups, organized around particular areas of interest or theoretical inquiry, meet for several hours over the course of the four-day conference. These in-person meetings, akin to seminar sessions, are the culmination of a months-long process of sharing work and discussing ideas. Prior to the November conference, working group participants exchange papers, offer feedback and suggestions on colleagues’ work, and establish a framework for the in-person discussion.

This fall I participated in a working group organized by Martin Harries and Nicholas Ridout, which focused on the interface between the public sphere and theatrical work. The group aimed to explore where the political efficacy of theater and performance lies. How does the stage space, the group asked, intersect with or impact the ‘public,’ understood as a spatial and discursive zone of inquiry, debate, and protest? In a self-reflective gesture, the group also asked if its grounding premise was, in fact, useful. Or did the demarcation of a ‘stage space’ and a ‘public sphere’ merely re-inscribe troubling binaries between aesthetics and political thought and activism?

My own contribution to the group was a small portion of my dissertation research. My larger project, “Performance and the Museum: Remainders and Afterlives,” focuses on women and artists of color, examining how performance is re-imagined in relationship to visual arts contexts. The project came about in relationship to the growing presence of live performance in museum and visual art spaces. Performing in several such exhibits and seeing others, I began to wonder how the infrastructures and concerns of visual arts contexts were shifting the way performance might be understood. Each of my chapters focuses on the relationship among live performance, visuality, and museum discourses. My analysis focuses on material documents like performers’ contracts, photographs, and costumes, as well as performers’ own bodies, exhibited within museum galleries.

The second chapter of my dissertation focuses on photographs of performances by Chicano performance artist Guillermo Goméz-Peña and the art collective Asco, exhibited at the Museum of Contemporary Art and the Los Angeles County Museum of Art (LACMA). Drawing upon this research, my ASTR paper focused on Asco and their performative action, Spray Paint LACMA, from 1972. My paper, “The Photographic Sphere: Spray Paint LACMA and Sighting an LA Public,” explored how debates about the public sphere are activated through photography and, further, how photography opens a visual space within which it is possible to sight a gendered critique of the public.

Formed in Los Angeles in 1972, Asco created embodied, conceptual works that engaged the Chicano Movement, avant-garde art, and the ways in which East Los Angeles intersected or was excluded from modes of cultural production endemic to Los Angeles. Spray Paint LACMA was made in response to a LACMA curator’s comment. Attending an exhibition at the museum, one of the group’s members asked a curator why no Chicana/o artists were represented. The curator responded, “Chicanos…[make] graffiti, not art.”[1] Angered by the response, the group returned to the museum and spray painted their signatures across its outer walls, framing the entire museum as Chicana/o art. A photograph, taken early the following morning, captures the group’s actions.

The photo, however, includes only one person in its frame: Asco’s one female member, Patssi Valdez. The other three (male) members of the group did not allow her to participate in the group’s nocturnal activities. She explains,

I was not allowed to go. They said, ‘You cannot run fast enough. What if we get arrested and go to jail?’ They were sort of protecting me, but at the same time I was pissed off. Especially since [Willie Herrón] was my boyfriend and was trying to protect me, but I was like ‘Get a life, I want to go.’[2]

In the photograph, Valdez stares avowedly away from the lens of the camera, a pose that seems to illustrate her mood—pissed off at her exclusion from the night’s events. Her figure claims photographic space, I argued, asserting her agency to take back space from which she had been doubly excluded both by the curator’s derisive words and her fellow collaborators. The photograph, my paper argued, framed LACMA—the city’s first publically funded art museum—as an interface across which tension erupts over who can be constituted as the museum and city’s publics, rendering legible who is allowed to occupy public spaces and claim representation within public institutions.[3] The image represented not only the literal space of LACMA’s façade but was, I argued, the site/sight of an assertion of a counter-Chicana-public, questioning artistic marginalization, public funding, and representation.[4]

Prior to meeting in November, our working group circulated our papers, ensuring that we had each read everyone’s paper. Our session was the very last on the last day of the conference. Convening at eight in the morning, we were all dragging a bit after 72 hours of long days and late nights. Plied by coffee, our discussion soon got underway propelled by Harries and Ridout’s thoughtful framing. The two launched our three-hour session asking, somewhat expansively, how theater and performance could re-define the public sphere. As our papers collectively addressed everything from Tennessee Williams, to the diaries of a nineteenth century English abolitionist, to a 1970s Iranian art festival, our answers were diverse. While always collegial, our discussion was far from homogenous. It ranged from whether performance, in the end, could offer anything new to the idea of the public sphere to whether the public sphere was a useful analytic to discuss avant-garde, queer, radical, or anti-racist works.

Such questions were a microcosm of the larger discussions that animated the conference. Throughout the conference, questions were asked—formally and informally—as to the state of higher education and what our position as theater scholars is within the shifting terrain of the university. Sue Ellen Case, Distinguished Professor in the Department of Theater at UCLA, addressed the conference body in a roundtable on the state of the profession. Case’s remarks questioned what radical scholarship now looks like. A critical provocation, Case argued that what was radical twenty years ago has become the canon, and she urged the room to question what it means that the vanguard edge of critical scholarship has become, in her view, ‘mainstream.’ While Case and other senior scholars framed a conference-wide discussion about theater and performance scholarship broadly, the conference was marked by vocal efforts to discuss that lack of diversity within the conference membership. A booth was set up, manned at one point by Sean Metzger, an associate professor in the Department of Theater at UCLA, for conference-goers to share or listen to stories of bias or discrimination that had occurred at ASTR conferences. The booth, in some ways a counterpoint to the formal state of the profession roundtable, provided an intimate forum for people to share their emotional and affective experiences with the conference and its historic lack of racial, ethnic, and gender diversity.

As I near then end of my tenure as a graduate student at UCLA, the role professional conferences serve within the academy has become clearer. They are a space to forge and cement professional and personal relationships, to receive feedback on one’s scholarship, and to discuss the big ideas that are animating the field. Importantly, conferences like ASTR also provide a space to internally debate the changes that need to happen within the field and to assert the import of our chosen profession as theater and performance scholars and pedagogues. While ASTR is often this odd liminal weekend, spent largely in windowless hotel conference rooms, it creates the space and time for a community of theater and performance scholars to come together.

Gwyneth Shanks is a doctoral candidate in the Department of Theatre and Performance Studies at UCLA. Her dissertation explores how performance remains when it intersect with the contexts and discourses of the visual arts. Her work has been published in the Journal of Dramatic Theory and Criticism, Third Text, and Theater Historiography: Time, Space, Matter. She has performed in works by Marina Abramović, Jérôme Bel, Maria Hassabi, and Trisha Brown. She works in the Academic Programs department at the Hammer Museum. She received a CSW Travel Grant to support her conference trip.